Why Death Valley? We were a little skeptical about driving four and a half hours to Death Valley to see… a big empty desert, but the sailing rocks (the mysterious rocks that move on their own) seemed like they would be pretty cool. The drive was a little longer than we expected (since we tend to get distracted easily by anything that looks interesting on the way) We stopped in Ridgecrest, CA for lunch and some Death Valley essentials (hat, sunglasses, sunscreen.) (Travelers coming from the south, this is the last decent place for food and essentials….the other town just outside of Death Valley is pretty… scary looking.)

We saw the Trona Pinnacles National Landmark on the way to the Valley and stopped to check it out. It wasn’t until we stopped and got out of the car at the Pinnacles that we realized how insanely hot it was outside. After only a few minutes outside, my camera felt like it was on fire! After a few toasty pictures we continued on our way to Death Valley.

We stopped for gas at the first sight of civilization in the Valley, and the power was out. We didn’t have any cash to get gas (not smart on our part) so we drove down to the Furnace Creek gas station (the only other gas station in the park) which added another 45 minutes onto our journey.

In the end, the detour was beneficial. The gas was nice and expensive (as to be expected in the middle of nowhere) but we were able to pick up some snacks for the road, a cool ornament (yes we are one of those couples,) and stopped at the Visitors Center which was closed but had this cool temperature sign out front.

To get to the Sailing Rocks, we still had to drive to the very North Western part of Death Valley to the Ubehebe Crater and then on a 28 mile dirt road that would lead us to Racetrack Playa, the location of the Sailing Rocks. At this point we only had a few more hours until it got dark and we were afraid we weren’t going to make it to see these rocks we came all this way for. (I never thought I’d drive hours and hours to see rocks of all things.) Luckily, we made it to Ubehebe Crater and checked it out… it was pretty cool. Much bigger than we expected. But more importantly, we were closer to the Racetrack Playa! Now just this 28 mile dirt road was in between us and this cool site. We started driving along on the dirt road which quickly turned into annoying washboard roads. Not a big deal, we’ve been off-roading in Idaho plenty of times! Thirty minutes later, it was really getting annoying. The road was much more miserable than we thought it was going to be! We also had a truck that isn’t super smooth to begin with and we were bouncing all over the place!

Still driving 10 mph on the washboard road. The sun is almost setting behind the mountains. We ask ourselves, “Do we turn around? Do we keep going? Someone said they made it to the track in an hour! Yeah right.. This is ridiculous!!” I wasn’t keeping track of the mileage so I had no idea how far we had gone or how much farther we had to go, but it couldn’t be that much farther right? We decided to keep going. Josh also gave the truck a little more gas to see if we could go faster without breaking the truck apart. Maybe not the smartest decision, but our insanity was on the line at this point.

Ok. Now we’re really getting sick of being bounced around in the car, two hours? It was ridiculous! We were seriously hoping this miserable trip would be worth it!!

We see Teakettle Junction! Thankful for a chance to take a break from that miserable bumpy ride and take a picture (of course… Typical tourists) We were so close!! Just a few more miles!

We then see the valley!! Yay!! So close! But suddenly the washboards got worse!! Is that even possible!?!? What the heck! The sun was going down, but there was nothing we could do. It was back to 10mph. After all, we wanted this old truck to hold together so we could get back home eventually. We finally made it to Racetrack Playa with about 15 minutes of light left (at least it was something.)

We parked the truck and I book it with my camera to these dark round shapes in the middle of the dry lakebed about 1/4 mile away, praying these are the cool sailing rocks we drove all the way here to see!!

… As I got closer, I realized it was a bunch of dead bushes…. seriously!?!?

Of course when we got back to the truck I noticed the information sign that says most of them are at the other side of the lake bed. Yeah. Whoops.

We jumped back into the truck with maybe 5 minutes of sunlight left and drove to the opposite end of the lake. At this point I was having a really hard time making out any shapes at all on the dry lakebed. So we grabbed our flashlights/phone and quickly walked toward the sign. We had finally made it, for real now. We started running again, hoping to get at least one good picture, and we found a trail that led us to one!!!

And then we found another trail and followed it to another one! This one had a cool lizard underneath. We had to use Joshua’s flashlight to light it up a little because it was so dark.

We were able to see the Sailing Rocks in person right before the sun went down. A few observations we made: The dry lakebed was nothing we had ever seen before! The landscape alone was worth the drive! Joshua also pointed out that the silence in this place was almost erie. We hadn’t seen anyone else out here and until the sun went down completely, the only thing we could hear when we stood still and listened were each other breathing. No bugs, no wind, no animals, no people, no cars, no nothing. It was crazy. (Well we did see one car far away.) When the sun went down, the bats started came out which was also super fascinating because we heard them flying around us catching the bugs by our lights using echolocation.

We decided to hang out and take a few more pictures and watch the sunset before we headed back on that terrible road. On the way back we saw a cute baby skunk and two lizards that run on their hind legs like humans (the only animals we ended up seeing the whole Death Valley trip.)

Overall is it worth it? Yes, definitely. The Sailing Rocks and star gazing made it so worth it! It was such a unique experience! However, if you’re not amused by big empty deserts, I would recommend going during the cooler seasons so you can spend more time outside doing recreational activities. The summertime is a little to hot to stay outside for too long.

Here are some more pictures and some tips if you’re planning to visit Death Valley yourself. 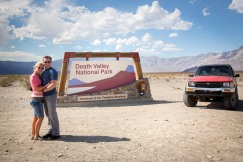